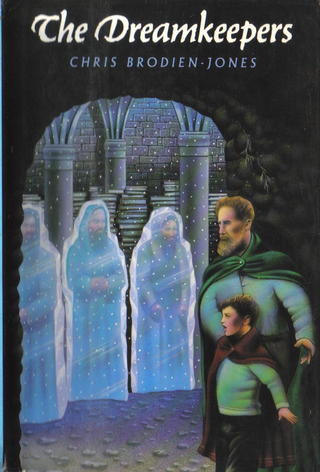 As snow covers the Welsh countryside, Derek and Eve Morgan discover Rhonabwy Court, a mysterious library. There Derek meets the Dreamkeepers, ancient scribes whose powers for good are being overcome by Iona, an evil enchantress. Iona has caused the freak snowstorms that are blanketing all Britain, while inside Rhonabwy Court her spells are freezing out the Dreamkeepers.

Then Derek finds, to his horror, that Iona is sending her dark dreams to Eve, luring the little girl to become her follower. There is only one way to stop Iona, the Dreamkeepers tell Derek, but first he must decode an old riddle, then make his way through the tunnels to the Other Side...

Derek is desperate to help, but Iona's weapons, like the dread Usk Beetles, are powerful and strange. And time - for Eve and for the Dreamkeepers- is running out.

Chapter 11
Trapped in the Spell of Ice


For Derek the rest of that night was like one of his dreams.

The Dreamkeepers were indeed old souls, with somber eyes and a formal way of speaking. Like kindly aunts and uncles, they offered him bits of chocolate and licorice twizzles, and asked him about school. They wanted to know which books were his favorites, nodding with approval when he mentioned books like The Three Musketeers, The Coral Island, and King Arthur and the Knights of the Round Table.

He peered over their shoulders as they wrote in the Dream Books. Their writing looked like splinters of light spiraling over the parchment.

“How do your Dreams reach people?” he asked a Dreamkeeper.

“A simple matter, really.” Throwing Derek a wrinkled smile and pointing to a glass orb on the table, she told him to look closely.

He detected within the orb a flutter of delicate wings. There were three: mysterious, transparent creatures, each no larger than one of Grandma’s thimbles.

“The Llanellith,” she explained. “Ancient deliverers of the Dreams.”

“The Dreams enter their wings, you see, and they fly up and then into the town. We have now only three, and a shame it is, when once there were scores.”

“The other Llanellith vanished when Iona Harkness appeared,” added a nearby Dreamkeeper. “No one knows where.”

The orb was lifted, and the Llanellith flew out. Up close they were luminous, sticklike creatures that reminded Derek of a kind of dragonfly. Floating silently up to the rafters, they paused, glided down, then hovered over the open books. As they skimmed across the pages, their wings seemed to absorb the ink’s golden hue.

“They once flew each night from the tower,” said another Dreamkeeper. “But since Iona took the tower from us, they have grown too weak to fly.” He pointed to a narrow fissure between two bookshelves. “Now when they carry the Dreams, they take them up this ancient chimney, which leads eventually to the outside.”

Derek peered up an opening that funneled skyward. Wet snowflakes drifted down, landing on his forehead and eyelashes.

“We fear that if they cannot access the tower,” said the Dreamkeeper, his voice quavering, “the Llanellith will not survive much longer.”

Before Derek could respond, Ashcroft rested a hand on his shoulder. “Follow me,” he said.

They set off at a brisk pace down a cold, windswept tunnel, then headed into the unlit maze of corridors. Before long, Derek had lost all sense of direction and his legs were aching.

After turning several corners, Ashcroft slowed down. They approached an archway cut into in the rock. “Now look through,” he instructed, “and tell me what you see.”

Derek wiped his nose with his sleeve and gazed through the archway; he saw a room with curved walls, no windows, and a high, vaulted ceiling. To his surprise, snowflakes were falling. As his eyes adjusted to the wintry light, he saw a group of unmoving figures. They seemed to be frozen solid and reminded him of winter images from childhood, ones he used to shake inside crystal globes. The snow continued to fall, the figures remaining perfectly still.

“Are those Dreamkeepers?” he gasped, staring with disbelief at the familiar beings, trapped inside layers of ice, which glistened in the half-light. Stacks of books, covered in a thin layer of frost, were piled up in great stacks behind them. The Dreamkeepers were completely motionless, as though locked in a trance of eternal winter.

“I am sure they are, though we cannot be certain. These were the Dreamkeepers caught by surprise, then trapped in Iona’s spell of ice. We’ve been unable to release them these long years.”

Derek was confused. Why would Iona do such a thing? “Can’t we melt the ice and set them free?” he asked.

Ashcroft shook his head wearily from side to side. “We’ve tried many times - and each time we’ve failed.”

“Maybe a small blow-torch! Electric heaters!” Derek thought of the woodstove in his kitchen back home. “What if we burned wood? There must be some way!”

Ashcroft gave a sigh of resignation. “Have you seen enough, then, Derek? I fear it is late, and we are both weary.” Silently he made his way back down the tunnel, ice clinging to his hair and cloak.

Derek followed. He desperately wanted to rescue the frozen Dreamkeepers, but he had no idea where to start. How could anyone reverse such a terrifying spell? Later he stumbled, dazed, into Ashcroft’s chamber and collapsed on a heap of cushions, falling instantly asleep.

He dreamed of a silver-eyed sorceress floating across the tiled roof of the house, Usk Beetles swimming through the air like snowflakes, a river sweeping past the monkey-puzzle tree. And there was his sister, Eve, balanced on an ice floe. “Follow me, Derek!” she called. “Follow me, the fairy snow-castles are over here!”

The ice floe under Eve’s feet cracked and started to break apart. He tried to warn her, but no sound came. Helplessly he watched as the ice disintegrated. There was a splash; when he looked again, Eve was being swept down the river, towards a forest of ice that rose in the distance.

Derek awoke to the smell of something burning. Startled, he sat up to see Ashcroft beside the fire, scraping a piece of toast with his knife. “Not one of my better efforts,” he chuckled, carrying a tray over to Derek. “Just find your way around the burnt bits.”

“Thanks,” said Derek, cramming pieces of toast into his mouth. “I have to be getting back after this,” he added, chewing noisily. He thought for a moment, and a new and frightening image came into his head. “I hope Eve can find her way down the Tumpy.”

“No doubt she will,” said Ashcroft.

“It’s possible,” replied Ashcroft. “The dreams Iona sends to Eve have a swift and fearful power, and may well continue to draw your sister back to Rhonabwy Court.

“But this is how it is: Iona is aging. In time she will crumble, like the Usk Beetle you saw crushed tonight. When she dies, the dark dreams will die with her – unless she has a successor, someone to carry on her work, someone who will send out the Dark Dreams.”

Derek sat quietly, as though in a trance, letting Ashcroft’s words sink in. He couldn’t imagine a more terrible fate for his sister.

Ashcroft’s face took on a hard, flinty look. “Once Eve has joined Iona, the Dark Dreams will continue.”

Derek retrieved his jacket and mittens, drying beside the fire. The gravity of the situation had finally hit him. His sister really was in terrible danger.

“Iona can’t have Eve!” he said fiercely, “I won’t let her! We have to fight against the dark spells!”

“And so we shall,” said Ashcroft, opening the door. “Now that you have come.”

What on earth did he mean by that? wondered Derek. With a puzzled frown, he stepped into the tunnel.

If you own a copy of "THE DREAMKEEPERS," please contact me & I'll send you a bookplate with my autograph & a personal message!

"Using the Welsh setting to best advantage, Brodien-Jones crafts an intriguing story, presenting dreams as influential over the spiritual and emotional well-being of a community."
-Booklist 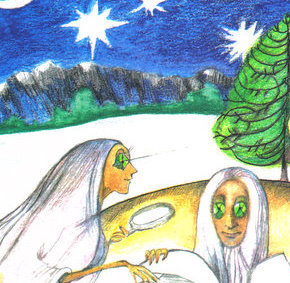 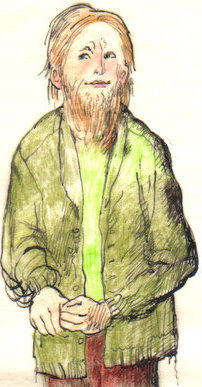